We have the technicians, the training, the Ford OEM parts, and the tools to get the job done fast the first time.  Trust our team to get to the heart of the problem quickly and get you fixed up and back on the road working.  Our experience will make the difference and ensure you pay for only what you need done. 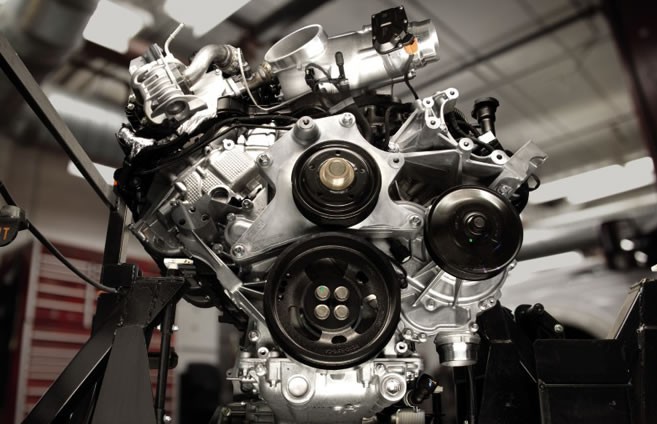 The Power Stroke® Diesel story began in 1982, when the Ford Motor Company made a decision that would transform their Super Duty® pickups into the most highly regarded and hottest-selling trucks in America. In pursuit of a whole new level of durability, power, torque and capabilities, Ford partnered with International Truck and Engine Corporation or ITEC (later re-named Navistar, Incorporated) to create a new standard in diesel engine technology that would help redefine the industry.

In 1994, the 7.3L was reborn. This groundbreaking new power plant revolutionized the diesel truck industry, with not just the addition of an all-new turbocharger, Direct Injection (DI), and incredible new power, but the birth of the Power Stroke® name.

7.3L features included a waste-gated turbocharger, HUEI fuel injectors and an air-to-air intercooler. The 7.3L engines were an instant hit in the trucking world. Production ran non-stop through early 2003. By that time, this engine's performance and durability had made the Power Stroke® name a legend among truckers.

Diesel Power Magazine ranked the 7.3L one of the top ten diesel engines ever produced. Today, over two million 7.3L engine-equipped Ford Trucks are still in operation – more than Chevrolet, GMC, and Dodge diesels, combined. During its 9-year production run, the 7.3L was widely acknowledged as a leader in diesel engine technology.

The result was a major increase in horsepower and torque (325 HP and 570 lb-ft), even with a drastic reduction in engine displacement. This was the first engine design driven by emissions requirements.

The Power Stroke® legend reached new heights in 2007, with the launch of a new 6.4L diesel. This engine's cutting-edge technology and reduced emissions pumped out an amazing 350 HP @ 3000 RPM with a peak torque output of 650 lb-ft at just 2000 RPM.

Ford Power Stroke® diesel engine technology has come a long way over the last three decades, but the party is far from over. For the 2011 model year, Ford is introducing an all-new, built-from-scratch, state-of-the-art 6.7L Power Stroke® diesel – and it's the most advanced diesel Ford has ever built.